If I Give My Soul

The documentary If I Give My Soul began the day co-director Andrew Johnson checked into a Brazilian prison, where he would spend two weeks living as if he were incarcerated in an effort to see prison from an inmate’s perspective. During this process, Andrew was brought face-to-face with two powerful forces in the prisons: narco-trafficking gangs, and Pentecostal Christianity.

In stories that have not been told and in locations that have never been filmed, If I Give My Soul examines how five Brazilian prisoners have coped with both Brazil’s profound inequality as well as the brutal injustice of Rio’s justice system. As members of Pentecostal Christian congregations in their respective prisons.

Through these inmates’ experiences, the film explores their journeys from hardened criminal, through conversion in prison, and to their release back into society. If I Give My Soul uses social science methods and first-hand experience to investigate if this religion is an escape and balm from the oppressive conditions of prisons, an elaborate show for the guards and justice system, or if their faith and experience represent something more.

Shortly before noon, Monday, November 9, 2010, authorities lost control of the Pedrinhas Prison Complex in Maranhão, Brazi.  More than a dozen inmates were killed, and law enforcement officials were sent to collect the severed heads of four prisoners that had been thrown over the prison walls. Inside the facility, corpses were piled in a janitor’s closet, five prison employees had been taken hostage, and ten inmates had been marked for execution if the rioters’ demands were not met. São Luis’ Police Commissioner Daniel Brandão needed to act swiftly but did not want to send in the Military Police because that would certainly double or triple the casualties. Brandão made a decision that has become increasingly common for prison officials facing this type of situation: he called on a Pentecostal pastor to negotiate peace.

Marcos Pereira, minister of the Last Days Assembly of God (LDAG) church in one of the gritty, peripheral neighborhoods of Rio de Janeiro, received the call from the prison marshal that afternoon and went straight to the prison, by now completely under inmate control. Pastor Pereira spoke with inmate leaders through a cell phone that had been smuggled inside and agreed to return the next morning to start negotiations. On November 10, Pastor Pereira and the church members were allowed to enter the prison complex, passing through the lines of heavily armed police officers. The Pentecostal group walked across the prison yard to speak with the riot leaders and emerged in less than an hour (filmed by a church member with a handheld camera) the door opened and two hostages emerged unharmed. The remaining hostages were freed an hour and three handguns and a collection of knives were surrendered to the police. The siege was over.

These words couldn’t be further from the the truth that these prisoners have experienced in their lives.  Coming from Rio de Janeiro, where bring young, black and poor gives you a 1 in 10 chance of being shot and 1 in 5 chance of editing up in prison – like these men did – they don’t have much evidence that they, indeed, are valuable.

But the message of the ministers of ADUD isn’t a typical Brazilian message, and flies in the face of societal paradigms and stereotypes.  Indeed, all across the nation, Pentecostal Churches have been sweeping through the lower classes and prisons – a “social phenomenon” – but have largely been unstudied or ignored by the upper classes.

The documentary If I Give My Soul began the day that co-director Andrew Johnson checked into a Brazilian prison, where he would spend two weeks living as an inmate.  He ate the same food, slept in the same cells and went through the routines as if he were incarcerated in an effort to see prison from an inmate’s perspective.  During this process, Andrew was brought face-to-face with two powerful forces in the prisons: narco-trafficking gangs, and Pentecostal Christianity.

Beyond the beautiful topography, major sporting events, and bikini-clad beaches, Rio de Janeiro is a city of contrasts, in which some of the most expensive neighborhoods in the worlds sit directly next to neighborhoods that suffer from some of the world’s most profound inequality and highest homicide rates.  Neighborhoods where regular violence and homicide does not produce an outcry.  They are Brazil’s “killable people”, and 1 in 5 of these young men will be sent to brutal prisons – concentrations of what society considers the worst of the worst.

But although society tries hard to forget these incarcerated men, they are still husbands, brothers and sons.  Many, who have decided to leave the gang lifestyle have found Pentecostal Christianity and decided to align themselves with God, leaving their gang.  They form powerful friendships with each other and reach out to God with an urgency difficult to match outside of prison.  Inmates form independent Pentecostal churches, claiming part of the prison as their own and prescribing rituals and regulations to follow – much like the gangs that these new converts have left.  Upon release, these newly-Christian ex-gang members will have a choice to make: slip back into the lucrative, sexy, powerful gang life, or continue in their new life.

Although the film employs sociologists, politicians, the writings of Howard Thurman and music of Johnny Cash to contextualize the social world, five prisoners’ – Jorge-Luiz, Carlos, Messias, Marcio, and Cristiano  – voices and experiences are front and center.  Through these inmates’ stories, we explore their journeys from hardened criminal, through conversion in prison, then to their release back into society. 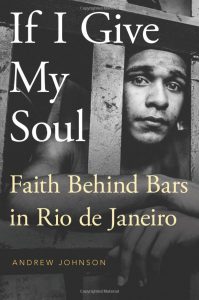 The film’s co-director, Andrew Johnson, wrote a companion book for the film. An extended look at the stories, sociology, methodology, history, and experiences that are engaged in the film. If you liked the movie, you’ll be fascinated by his in-depth accounts, analysis, and anecdotes of his time doing the research. Pick up a copy today!

Christianity Today says: “If I Give My Soul rises above its academic niche not just because Johnson has spent years inside the prisons with scores of religious volunteers, in and out of the favelas, speaking the language, and building trusting relationships with Pentecostal pastors, narco-gang leaders, crowds of prisoners, and even guards. And it’s not just because his writing is crisp and quick, capable of dramatizing an afternoon of dialogue and conflict in an open-air drug market or a blaring worship service inside concrete walls.

What really sets this book apart is Johnson’s quiet mastery of several areas of study necessary to make this subject three-dimensional. He integrates the sociology of prisons, the history of Brazil, of Rio and its favelas, the cultural and economic inner-workings of narco-gangs, and the practices and history of Pentecostal Christianity from before Azusa Street clear through to its presence in global slums today… If I Give My Soul is a must-read for pastors, chaplains, and others…”

Thank you! We have received your message.